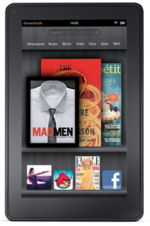 If the Kindle Fire 1st Gen already has FireFireFire v1.4a bootloader and TWRP installed you may skip this section.

NOTE: If your device appears to have issues fastbooting, gives bp1 panic messages, or is still waiting for the device you may need to manually fastboot it (steps 1-5 in guide) and then install TWRP Recovery, then again manually fastboot and install FireFireFire.

These instructions will hopefully assist you to start with a stock Kindle Fire (1st Gen), unlock the bootloader (if necessary), and then download the required tools as well as the very latest source code for CyanogenMod (based on Google’s Android operating system). Using these, you can build both CyanogenMod and CyanogenMod Recovery image from source code, and then install them both to your device.

Different maintainers setup their device inheritance rules differently. Some require a vendor directory to be populated before breakfast will even succeed. If you receive an error here about vendor makefiles, then jump down to the next section Extract proprietary blobs. The first portion of breakfast should have succeeded at pulling in the device tree and the extract blobs script should be available. After completing that section, you can rerun breakfast otter

You should see the proprietary files (aka “blobs”) get pulled from the device and moved to the ~/android/system/vendor/amazon directory. If you see errors about adb being unable to pull the files, adb may not be in the path of execution. If this is the case, see the adb page for suggestions for dealing with “command not found” errors.

It’s important that these proprietary files are extracted to the ~/android/system/vendor/amazon directory by using the extract-files.sh script. Makefiles are generated at the same time to make sure the blobs are eventually copied to the device. Without these blobs, CyanogenMod may build without error, but you’ll be missing important functionality, such as graphics libraries that enable you to see anything!

But that’s all just background info. The two files we are interested in are (1) recovery.img, which contains CyanogenMod Recovery, and (2) cm-13.0-20161224-UNOFFICIAL-otter.zip, which is the CyanogenMod installation package.